Because the focal point of Heart of Darkness is Marlow's journey up the Congo River, I decided to do some research. The largest river in western Central Africa, the Congo serves as the most powerful river on the entire continent. Although the Nile is overall the longest African River, the Congo comes second with a length of 2,900 miles and holds the title of fifth longest river in the world. Discharging 1.5 million cubic feet of water per second, the Congo has the second largest flow in the world.
In 1484, the Portugese explorer Diogo Cam became the first European to enter the Congo River, and he claimed the area for the king of Portugal. It wasn't until 1876 that parts of the Congo were claimed by Belgium. 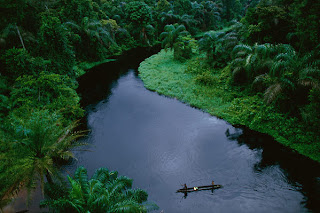 I love the pictures of the river that you posted, Samantha. Conrad paints a very vivid picture of the Congo River in Heart of Darkness and personifies the river with his diction. For example, on page 803 of Norton (towards the beginning of Part 2), Conrad describes the river: "Going up that river was like travelling back to the earliest beginnings of the world, when vegetation rioted on the earth and the big trees were kings. An empty stream, a great silence, an impenetrable forest." We talked in class today about how this passage serves as an introduction to Marlow's steamboat journey to find Kurtz. As Collin mentioned today in class, this environment is in a primordial state before Marlow and his crew intrude.

I think it's interesting how the Congo River is described as a snake. I think the snake imagery could be connected to the Eden-like state of the unexplored Africa. The curves of the river mysteriously wind through this hellish vision of Africa. The river is an essential part of Marlowe's journey because it gives him the ability to discover the new world.

Since Conrad's novella takes place around the Congo River it reinforces the fact that the Congo River is vital not only to the story but also to Africa. As Samantha points out, it obviously takes about a large amount of the continent and plays an important role in many African societies.

These pictures show how beautiful the heart of Africa is. The lush vegetation everywhere is an incredible sight. Conrad often describes the natural setting as edenic, as we have said in class. However, today we also mentioned how the reader is unsure if this edenic image is good or bad. I appreciate Conrad's colorful descriptions of nature in a positive view, separate from the harsh reality of the things happening during Conrad's Congo visit.

While traveling along the Congo River, Marlow's steamboat encounters the "blind whiteness of the fog" (p. 106 in Signet Classics). Fog is somewhat relatable to the concept of darkness in this novella, since it can also obscure vision. Fog created a sense of doubt in the crew, as they weren't sure in which direction to steer. It also made them susceptible, so the natives took advantage of this situation and attacked.

I also believe the Congo River is a vital aspect of Conrad's Heart of Darkness. Like Chloe, I found Conrad's comparison of the river with a snake to be quite perplexing. The snake imagery adds to the very Edenesque reminiscience of Africa. Furthermore, Marlowe describes the river as a temptress that Marlowe is addicted to. The unihabited, lush vegetation of Africa and the temptating Congo River is indeed very much like the Garden of Eden.

I also believe the Congo River is a vital aspect of Conrad's Heart of Darkness. Like Chloe, I found Conrad's comparison of the river with a snake to be quite perplexing. The snake imagery adds to the very Edenesque reminiscience of Africa. Furthermore, Marlowe describes the river as a temptress that Marlowe is addicted to. The unihabited, lush vegetation of Africa and the temptating Congo River is indeed very much like the Garden of Eden.

Thanks for the shout-out, Julia!

I think it would also be worthwhile to look at the Congo River from an economic perspective. As we mentioned in class, European leaders split Africa amongst themselves in 1884 and 1885. Leopold II claimed the interior of the continent and named it the Congo Free State. However, his personal country just happened to contain the Congo River in its entirety! Leopold II probably wanted exclusive control of the river to prevent trade competition with other countries. However, I believe his decision has present-day consequences, as many countries surrounding the Democratic Republic of the Congo are essentially landlocked and denied their share of such a life-giving river. The borders drawn to create exclusive wealth in the 19th century continue to hinder the majority of Southwestern African countries. 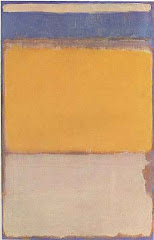